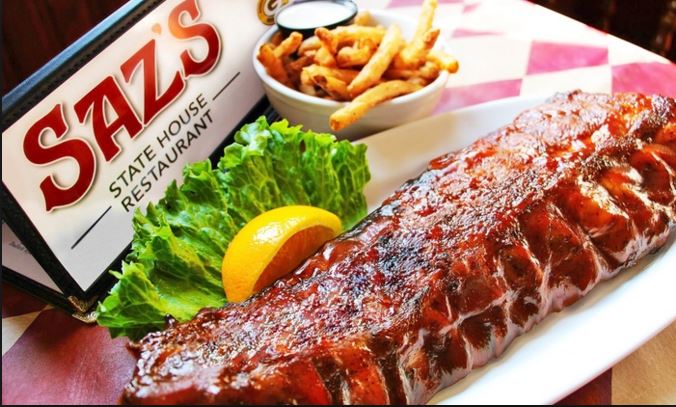 March 1st marks four decades since Saz’s State House opened in a historic building on 55th and State. A charming tavern-turned-restaurant lauded for serving “Milwaukee’s Best BBQ” for many years, the State House’s inception was just the start of what is known today as Saz’s Hospitality Group.

Throughout the month of March, Saz’s State House will celebrate its anniversary with food and drink specials including 40 cent MillerCoors tappers at the famed “Round Bar,” throwback pricing on its award-winning BBQ Baby Back Ribs at $40 for two full rack dinners (Monday-Thursday, dine-in only) and retro drink specials. In a nod to its heritage as a lively tavern, the State House will also elicit nostalgia with live entertainment including music from the 70s and 80s every Thursday in March, plus giveaways, raffles and a grand buffet from 6-8pm on the final Thursday, 3/31, with $10 donation to benefit the Wisconsin State Fair Foundation and Variety-the Children’s Charity of Wisconsin. Raffle prizes will include items like Brewers Opening Day and season tickets, MillerCoors swag, Summerfest admission tickets and more.

“Celebrity” bartenders will bring fond memories to life for those who have held a seat at the Round Bar since the start. Whether longtime customer or someone swinging through for a Saz’s Sampler Combo at Summerfest or the Wisconsin State Fair, this celebration is for fans new and old. For full details, visit http://sazs.com/sazs-is-turning-40.

While consistently recognized for its menu items, Saz’s State House is perhaps best known for its personable founder and well-known namesake, Steve “Saz” Sazama, a community figure welcomed warmly in so many circles throughout Milwaukee and the surrounding areas.

“Forty years, I can’t believe it,” said Sazama of the anniversary. “When I think of how far we’ve come, how much we’ve grown, I couldn’t be more proud or excited for what the next forty will bring. It started as a little tavern; an adventure in my thirties. And now? It’s incredible.”